Just for a moment, forget health care. Instead, try to picture Mission Control at NASA, where rows of scientists and engineers gaze intently into their screens, as a shuttle full of astronauts lifts off for the international space station.

Using advanced digital technology, NASA personnel can view essential data in real time—the astronauts’ vital signs, the amount of pressure in the thrusters, the weather at the launch site, the position of the space station, and much more.

Equally important, predictive software can warn about orbiting debris that might later drift into the shuttle’s path. If anything troublesome is detected, a course correction can be made in plenty of time to avoid a collision. 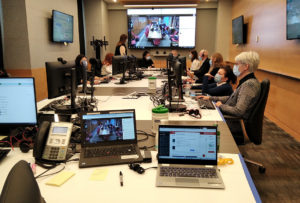 During the first phase of the C4 Command Centre, directors and senior administrators gathered in the JGH board room to examine data about healthcare users across CIUSSS West-Central Montreal. (Click to enlarge any photo.)

Now imagine a busy nerve centre—same concept, smaller scale—as it monitors the complex activities of a healthcare network and its minute-by-minute changes. That, in a nutshell, is the idea behind CIUSSS West-Central Montreal’s new command centre, which is known as C4, because it focuses on “better Care through Communication, Collaboration and Creation”.

By consulting multiple screens in a central location, the CIUSSS’s decision-makers can, for example, examine how various types of healthcare users are flowing through the network, identify potential bottlenecks, and ensure that specific users are being smoothly and promptly transferred from one facility to another, or from one service to another.

Although similar command centres can be found in some of the continent’s larger healthcare systems, C4 is unique in Canada (and possibly even in North America), since it gathers and displays data about an integrated healthcare network, consisting of multiple sites overseen by multiple directorates.

Rather than keeping an eye on a single hospital, it will track the intricate and interconnected activities of the five long-term care centres, three rehabilitation centres, several CLSCs and other facilities in CIUSSS West-Central Montreal.

Of crucial importance to C4 is the substantial financial support that the JGH Foundation has provided, in recognition of the vital role that the command centre is being called upon to play.

“By bringing together representatives from our various directorates, and by having all of them examine and react to a common set of data, we can craft a solution that’s better coordinated and more effective,” says the CIUSSS’s Assistant Executive Director, Dan Gabay.

“This is the only way to properly come to grips with the constant stream of new information in a CIUSSS that’s as large and complicated as our own.”

For instance, Mr. Gabay says, a particular challenge is posed in most healthcare organizations by certain hospitalized patients (known as NSAs) who no longer require active care, but are waiting to be transferred to a rehabilitation centre, long-term care centre, home care or other facility. Before the COVID-19 pandemic, the JGH had more than 60 such patients at any given time.

With the help of information that is compiled and displayed at the command centre, this number is now being reduced, so that urgently needed hospital beds can be used for patients requiring acute care.

As of this past February 15, the JGH had only 22 NSAs, thanks to efforts by Mary Lattas, who is the CIUSSS’s Associate Director of Rehabilitation and Multidisciplinary Services, as well as the network’s lead person for NSAs. To push this number even lower, she is collaborating closely with clinical leaders throughout the CIUSSS.

Another example is cited by Joanne Côté, Director of Quality, Innovation, Evaluation, Performance and Clinical Ethics. In January, CIUSSS officials knew that at some point, the government would authorize the CIUSSS’s Catherine Booth Hospital to receive rehabilitation patients who were COVID-19-positive.

Instead of simply waiting for the ministry’s announcement, administrators used the command centre to factor the upcoming designation into their overall plans. This enabled staff at Catherine Booth to more smoothly shoulder their new responsibilities when the time came.

Ms. Côté also notes that this is a true pioneering effort, since C4’s network-wide approach differs so strikingly from other command centres that focus on hospitals. “We don’t have a model to follow, so we’re building it as we go,” she explains. 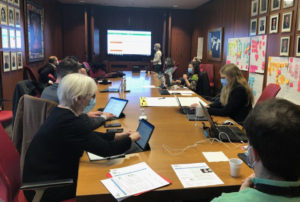 To ensure that the first COVID-19 vaccinations were administered smoothly, an extension of the C4 Command Centre environment was set up in January in the board room of Donald Berman Maimonides Geriatric Centre.

To help bring this vision to life, the CIUSSS has once again enlisted its partner, Maisha Labs, which has contributed technical expertise to various projects over the past several years. The Israeli-based company, with offices in Tel Aviv and Montreal, helps organizations make more productive use of digital technology to handle the most demanding tasks.

With support from Maisha Labs and the CIUSSS’s own Innovation team, an initial version of C4 was established in mid-December in the JGH board room. This COVID-19 resource room brought together senior leaders from each clinical specialty for eight hours a day, five days a week, for 10 consecutive weeks. Numerous screens—everything from large wall-mounted models to small laptops—displayed the data that senior staff analyzed and worked with.

In addition, some members of staff met in smaller groups to review specific types of data. For example, Dr. Shannon Fraser, the Medical Director for C4, oversees the JGH’s daily bed huddles at 8:40 a.m. and 4:00 p.m. Her group includes the bed flow coordinator, as well as representatives from Nursing, Infection Prevention and Control, Rehabilitation, Mental Health, Home Care and Long-Term Care.

“It’s a better system, because it allows us to be more proactive, rather than reactive,” says Dr. Fraser, who is JGH Chief of General Surgery. “It’s a very elaborate project, but it’s the only way to properly come to grips with the constant stream of new information in a CIUSSS that’s as large and complicated as our own.”

Also in December, a temporary extension of the C4 space was set up in the board room of Donald Berman Maimonides Geriatric Centre to assist with decision-making, as the first residents and staff were about to receive their COVID-19 vaccinations.

By mid-February, as the pandemic’s numbers trended downwards, the COVID-19 Management Room was disbanded, and much of its hardware was moved to De La Montagne. At that location, the Public Vaccination Command Centre was opened under Christine Touchette, the CIUSSS’s Director of Frontline Services.

The JGH board room continues to be used as C4’s strategic site, where the CIUSSS’s leaders gather regularly to review the latest information and make any necessary adjustments to ease the flow of healthcare users through the system. C4’s operational site is expected to open in early April.

C4 is closely aligned with the concept of “Care everywhere,” the digital health vision developed by Dr. Lawrence Rosenberg, the CIUSSS’s President and CEO. Its objective is to have care delivered wherever the patient or client happens to be.

With this in mind, over the coming 18 months, C4 will focus on:

According to Amanda Babbitt, CEO of Maisha Health Systems, “C4 will also allow the CIUSSS to keep building on the concept of the virtual ward, which consists of patients who are at home and are not ill enough to be hospitalized, but have chronic conditions (such as diabetes) that need to be monitored regularly.”

Ms. Babbitt adds that C4 will enable healthcare professionals to more effectively assess patients wherever they happen to be, through the use of home monitoring tools, such as smart watches and smart phone applications. Monitoring at-risk patients may make early intervention possible, in order to prevent an Emergency visit or hospitalization.

“The healthcare environment is becoming more complex all the time,” says Mr. Gabay, “and it was heading in that direction even before COVID-19 hit us. That’s why we agree with Dr. Rosenberg that this move is so necessary.

“It’s also why we’re so determined to build a resource environment that’s sophisticated and flexible enough to help us respond to whatever challenges lie ahead.”