By danina25 October 2021No Comments

Not long ago, an inspired idea occurred to a geriatric nurse in one of the long-term care centres in CIUSSS West-Central Montreal: Why not attach an unobtrusive, digital sensor to the undergarments of elderly residents in long-term care, so that staff can be wirelessly alerted the instant any bodily excretions are detected. 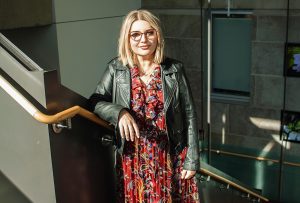 Danina Kapetanovic, Chief Innovation Officer and Head of OROT for CIUSSS West-Central Montreal. (Click on this or any image to enlarge it.)

Since the soiled clothing would be changed more promptly, the residents’ discomfort would be minimized, as would the possibility of skin irritation or an infection.

And since an undergarment would be changed only if a call for assistance were triggered by the sensor, staff would no longer have to conduct routine, time-consuming checks of all residents, including those who might not need help at that moment. As a result, nurses would have more time for other tasks—a major benefit, given their demanding workload.

So, the nurse’s idea held great promise—but what were its chances of coming to life?

Specifically, could anyone take charge of searching for a capable entrepreneur to develop the product? Or help determine how to finance the idea’s refinement? Or gather private-sector innovators and public-sector healthcare professionals around the same table?

Established by the Jewish General Hospital (a member facility of CIUSSS West-Central Montreal), OROT is known as a “connected health innovation hub.” Too technical? Then simply think of OROT as a kind of matchmaker, whose role is to arrange a harmonious and fruitful marriage between worthwhile ideas and creative developers.

Appearances to the contrary, “OROT” is not an acronym or an abbreviation.

The name of the CIUSSS’s connected health innovation hub is spelled entirely with capital letters to emphasize its dynamism.

The word itself is a transliteration of the Hebrew term for “illumination” or “lights”.

By forging connections and by acting as a catalyst for innovation, OROT is supporting the vision of the JGH and the CIUSSS to embrace and adopt new products and tools that make the most of digital technology.

In a broader sense, OROT is also integral to the over-arching strategy of “Care Everywhere”—in other words, focusing on the evolving needs of patients and clients. Then, with the help of digital technology, care or support is brought to them, wherever they happen to be (e.g., in hospital, in a rehabilitation centre, at home). 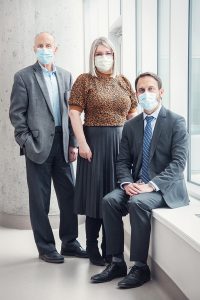 According to Danina Kapetanovic, the CIUSSS’s Chief Innovation Officer and Head of OROT, considerable progress has been made since the hub was launched in the summer of 2020. However, she notes, no products have yet come to market, because the process is gradual and painstaking.

Many steps are required, including consultations with clinicians and other employees who will eventually use the new product; tests to be certain the product performs as intended; and research to ensure that it complies with regulations for patient safety.

Ms. Kapetanovic says a prototype of the incontinence sensor has already been developed by a young start-up technology company in Germany. Working with OROT, the company will embark on a series of workshops and interviews this fall to get feedback that will be used in refining the sensor’s design and operation.

Then, in early 2022, research will be conducted to demonstrate whether the sensor is actually capable of doing what it’s supposed to.

Other projects are also in the pipeline, says Ms. Kapetanovic. Among the most promising is the modification of a digital monitor that now checks patients’ vital signs. The objective is to transform it into a workflow tool—that is, to give it the additional capability of immediately documenting the clinical data that it collects. This will allow nurses to spend less time on paperwork and more in tending to patients’ needs.

As well, a project has been proposed to improve communication between CIUSSS staff and the families of residents in long-term care.\A round-table discussion (known as a “design thinking session”) will soon be held with a number of participants, including a nurse, orderly, family representative and clinical administrator.

Support from the JGH Foundation

OROT is changing the face of innovation in health care and social services, with support from the JGH Foundation.

Donations to the Foundation are gratefully accepted online.

Together, they will help determine whether existing technology can be adapted for this purpose, or whether a new device needs to be developed from scratch.

“Of course, no one can predict the future, but I believe we can create the future we want,” says Dr. Lawrence Rosenberg, President and CEO of CIUSSS West-Central Montreal.

“One of the key ways to do that is by reaching out and creating partnerships with the private sector. Those collaborations empower us to keep moving ahead with our digital strategy and, in the process, fulfill of our vision of ‘Care Everywhere.’”

“Of course, no one can predict the future, but I believe we can create the future we want.”

Dr. Rosenberg says he is “thrilled with what Ms. Kapetanovic has achieved with OROT” in such a relatively short time—efforts that have even generated interest within Quebec’s Ministry of Health and Ministry of Economic Development.

“Innovation hubs are becoming increasingly popular,” he notes, “but they’re not all created equal, nor are they all created for the same reason. In Quebec, ours is a fairly novel undertaking, especially in the way we’ve gone about creating it.”

Dr. Rosenberg has also found that OROT energizes staff, “because they’re working on making practical use of good ideas. This allows everyone to be as creative as possible, and not just to function like a cog in the system.”

A key element in OROT’s strategy, Ms. Kapetanovic explains, is to prevent the errors that have previously caused some private companies to stumble: Their biggest mistake was to rely primarily on their best instincts, plus some research and market testing.

This put them at a disadvantage, she says, because they lacked an in‑depth understanding of how health care (and the public healthcare system) works. The unfortunate result was products that did not fully mesh with the practical needs of patients, clients or staff.

“Also, when private companies release a product that’s unrelated to health care, they’re able to keep improving it, even as it’s being used,” Ms. Kapetanovic says. “This can’t be done in health care, because it’s a complex environment where safety is critical. The product has to be safe and effective, right from the start.”

Got a bright idea?

If you have an idea for a product, tool or other form of technology (digital or otherwise) that you think could improve the delivery of health care or social services at the JGH or elsewhere in CIUSSS West-Central Montreal, OROT is eager to hear from you.

Employees who want to make a suggestion are encouraged to complete and submit a downloadable form.

External companies interested in working with OROT are invited to complete and submit their own downloadable form.

OROT overcomes these limitations by giving developers access to the vital insights, opinions and suggestions of healthcare users and professionals, in order to ensure that the product will meet everyone’s requirements by the time it hits the market.

This process also benefits members of staff who may have to modify their work habits when the new product is introduced. “If you drop something new on someone who’s done their job in a certain way for a long time, their reflex is often to reject it and not want to change,” says Ms. Kapetanovic.

“But by involving staff in the co-creation process at an early point, you’re managing change as you go along. By the time the finished product arrives, people already feel a sense of ownership. They’re eager to put it to use, because they’ve been a part of creating it.”

Ms. Kapetanovic sees her role as that of a “convener”—someone who brings all of the interested parties to the same table, launches them on a journey of creativity and development, and keeps them on course.

“At OROT, we form a supportive circle—a kind of protective shield—around innovators and entrepreneurs to keep them moving in a direction that maximizes their chances of succeeding as quickly as possible. After all, their success is ultimately ours, as well.”

OROT, the connected health innovation hub of the JGH (within CIUSSS West-Central Montreal), links private-sector entrepreneurs with public-sector healthcare experts. This is helping to solve the puzzle of how creativity can be nurtured, so that new products and tools are developed to improve the delivery of care.